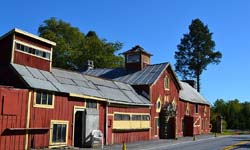 The Kimlin Cider Mill is a converted barn structure that contains a room-sized cider press, cafe, museum room, and a full residential section.  An old mid-19th century barn forms the core the Kimlin Cider Mill and the press dates to around 1900. The Mill is situated on approximately two acres of land and was part of a larger agricultural property owned and operated by the Kimlin family since the early 1850s when the Kimlin family first came to this country from Ireland.

The Mill operated for about 90 years at this location and became a well known local attraction.  In addition to selling cider, donuts, and cookies, starting in the 1920s a “museum of antiquity” was started and continually expanded throughout the space.  The property surrounding the Mill also evolved into a park and even a golf course. Sheep were also raised in the pasture.

In 2000 a developer purchased the property and planned to demolish it in favor of redevelopment.  The Cider Mill Friends of Open Space & Historic Preservation, Inc. was started by local citizens to save the Mill from demolition. Having the property designated a Poughkeepsie Local Landmark provided a level of protection against demolition.

More information about the history of the Kimlin Cider Mill can be found on the CMF website.