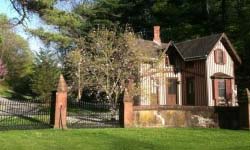 The Poughkeepsie Spring emerges from the earth off Sharon Drive in the Town of Poughkeepsie, several hundred feet northeast of the road’s intersection with Route 9, in an overgrown thicket of vines, saplings, and poison ivy. From there a small stream meanders northward through an adjoining property, and then through the open meadow at the western edge of Maple Grove, past clumps of cat-tails and other wetland plants. Close to the northern edge of Maple Grove, the stream crosses Route 9 through a culvert and then makes its way down through the Poughkeepsie Rural Cemetery to the Hudson River. It is a very small water body, and would likely be totally ignored were it not for the legends linking it to Poughkeepsie’s early settlement history. Early maps indicate that a Livingston house and mill were located close to the stream’s entry into the Hudson.

One now widely accepted explanation of the meaning of the name “Poughkeepsie” evolves from a story surrounding the first legal settlement in the community. Johannes Van Kleeck and Myndert Van Den Bogaerdt, sons of the original settlers, frequented a spot close to the present New York-Albany Post Road, less than two miles south of the present courthouse at Poughkeepsie. The Indians followed a trail to this same point, known by the two boys as Rust Plaetz, and meaning Resting Place. The Indians had another name for the spot, which was marked by a spring, and, so the story goes, surrounded by cat-tail reeds, a small stream issuing from the spring. They used three words to describe it: uppuqui-meaning lodge covering, the name of the cat-tail reed; ipis-little water; ing-meaning place; and freely translated, “The Reed-covered Lodge by the Little Water Place.”

The Dutch and the English settlers spelled the name phonetically, and it appeared in various combinations of letters. In the Van Kleeck-Ostrom lease it was “Pockkeepsin.” A more familiar later form of the word was “Apokeepsing,” resembling uppiquiipis-ing, until the “A” was dropped; and out of Poughkeepsing there came the accepted name, “Poughkeepsie.”